The Dutch children’s programme Klokhuis has an interesting series on the brain. We learn all about the major topics in brain research, which both shows that Klokhuis is master in explaining things in an accessible way and that the brain is still an extremely trending topic, pushed in particular by the flourishing of cognitive neuroscience studies in recent years.

The latest episode, however, deals with Artificial Intelligence: or, what is the difference between the human brain and the computer brain? A small test: what is the longest river in the world?, asks the researcher. Klokhuis presenter says: Amazone. The researcher Googles and says: no, you are wrong, it is the Nile. An interesting form of testing, where the performance of both contestants (the computer and the human) is tested against the knowledge of the computer (who says that the Nile is the longest river? How can we know?). Of course it was a human, at some point, who knew that the Nile was longer, and put it into a Wikipedia entry somewhere on the web, so that nobody would forget.

It suddenly struck me that comparing computer intelligence and human intelligence is essentially a category error. It is like asking the question: who’s the better carpenter, a carpenter or a hammer? Huh? The carpenter does his carpenting *with* the hammer. It is a tool that enables him to be the carpenter. Just so, are computers part of what makes us intelligent. They form a system, not opponents. Why is this obvious for hammers, but keeps on generating reasoning errors by Cognitive Scientists when it comes to computers?

This is a video of an awesome project I saw at TEI’14 in München this year. Using the Oculus Rift (that freaked out show-host Matthijs van Nieuwkerk yesterday at ‘De Wereld Draait Door’) the user sees the world from another bodies’ ego-centric perspective. At minute 2.10 you see me and Ambra Trotto trying out the thing. It was a strange experience and it reminded me of the out of body experiments using rubber hands, mirrors, and what not.

The Machine To Be Another – Art investigation from BeAnotherLab on Vimeo. 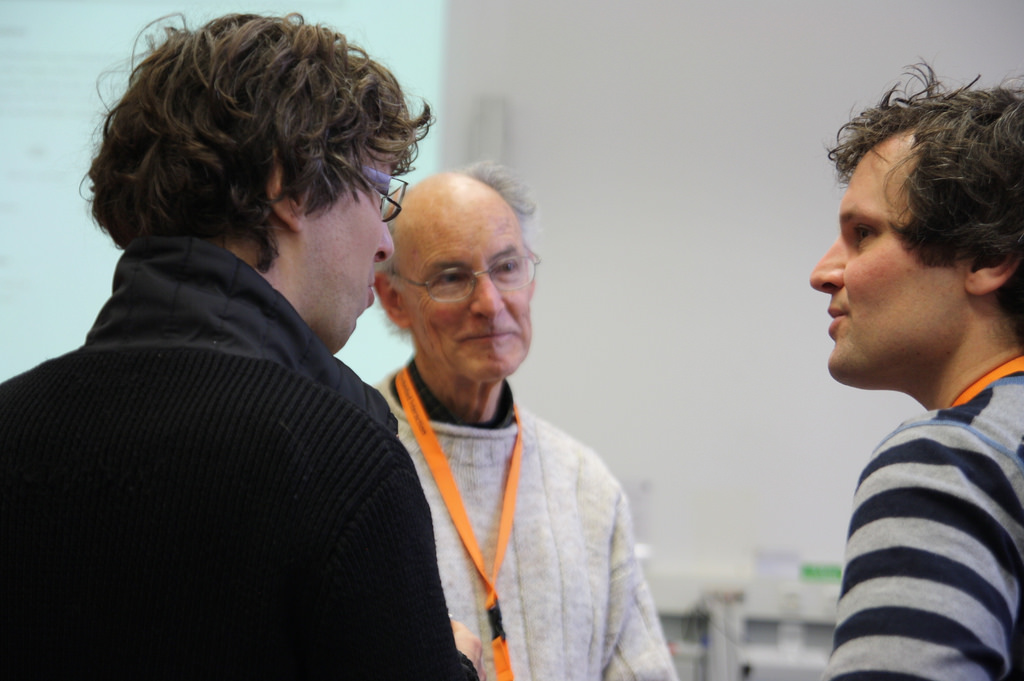 Meeting Bill Verplank during the coffee break, with Luc Geurts from KU Leuven.

Next year’s TEI at Stanford!

I have just heard that I have won the Best Paper Award at the ACM conference on Tangible, Embodied and Embedded Interaction, in Munich, (Feb 16-19, 2014). The paper has the rather cryptic title: Beyond Distributed Representation: Embodied Cognition Design Supporting Socio-Sensorimotor Couplings. It is mainly a summary of chapter 2 in my thesis and my supervisors Remko van der Lugt and Caroline Hummels are co-authors.

The main point of the paper is to show that tangible interaction can be more than creating physical interfaces to digital information, and that Embodied Cognition on a more fundamental level means that cognition is very much grounded both in sensorimotor couplings as well as in social coordination. And the challenge is to design interactive technology that connects to these couplings and coordinations, rather than to implement representations.

This is the website of the conference link:
The paper can be found here link

This monday I’ll be talking in Rotterdam about the ‘smart city’. In preparing I stumbled upon this fantastic (and famous) documentary, I had never seen. (I reached it through the website of Dutch philosopher Erik Rietveld, who combines Embodied Cognition theory and Architecture, together with his brother, who’s an architect). I agree with Erik that this documentary is a must see for anyone interested in ethnographical video observations of everyday behavior’s of people (in this case, in the urban, public space).

Check out RAMPED, the project we started together with Rhinofly, exploring the mix of the physical skill of skating and interactive technology: Today I was at the Postgraduate Embodied Technology Symposium organised mainly by Robb Mitchell of SDU Design in Sønderborg Denmark, for which many thanks to Robb!! The goal of this day was for students to practice giving talks and responding to them at a conference. But at the same time it was also a way for the researchers, together with the students, to explore this strange new topic we chose to name Embodied Technology or even Co-Embodied Technology. It was a nice day with talks and activities and demo’s. I will miss all these people when I go back to the Netherlands! It’s been a great time here in Sønderborg, with lot’s of space for thinking, doing, exploring, creating and interacting. Let’s try to create environments where there is much room for that: thinking, doing, exploring, creating and interacting. Think about how many spaces and situations there are in our lives where there is practically no room for any of those things. What you think is denied or forbidden. What you do is ignored or counter-acted. What you explore is deemed irrelevant or stupid. What you create is laughed at or broken. And the people you interact with seem to do everything they can to obstruct any smooth form of interaction. Too bad. At least in Sønderborg I experienced none of that. Something to be cherished!

When I get back in the Netherlands I will start working on an interesting project in collaboration with rehabilitation centre De Hoogstraat in Utrecht. Kids have to learn to drive their wheelchair, which apparently is not so easy, and it involves quite some practice. The practice is no fun, and a project has been set up to involve game design bureau’s to design interactive games that help these kids to learn to control their wheel-chairs. As part of a larger initiative, together with a student from Denmark, who is coming with me to the Netherlands for his masters’ thesis, we will explore a bit more conceptually and fundamentally what it means to augment a physical wheelchair, and or the environment the the wheelchair is in, with new interactive properties. Personally I would like to see the project addressing such basis questions as: how can you develop an identity as being in a wheelchair: how can this piece of technology become part of your body, part of who you are, instead of just a functional tool that compensates for a handicap? This project could in principle address fundamental questions of being (who am I and who do I want to be, how can technology be part of that?), if we think beyond the usual technical problem solving (how can the child learn to control the wheel-chair interface). I think that, especially when we add digital interaction, people in wheelchair could do very cool things that non-wheelchair users cannot. For example, just put two webcams close to the ground on each side, add some stereovision software, and you get a view of the world that nobody else could ever have from just walking. If all goes well we will broaden up this research to include more societal/public organisations, tech- and design companies, and investigate in all these cases what Embodied Technology might actually mean in practice.

(Ehm, well I don’t mean this sort of stuff, exactly:)

In preparing for a workshop we had to come up with an everyday situation that we could use for an acting-out exercise. We wanted the situation to be social, that is, multiple people in face-to-face contact. We also wanted the situation to involve explicit bodily movements, so, let’s say, some work activity, or something else in which people would be moving about the space.

To our annoyance, it actually proved quite difficult to come up with a suitable scenario. In everyday work situations, for instance, people in our developed Western world work quite individually when it comes to using the body. We sit and type on a computer, we construct, build or repair something, as a craftsman does, but this is all rather individual work, even if it is done together with others in the same space. The social interaction, in contrast, involves all kinds of nonverbal communication, but is not often directly connected to actual physical activity. So we stop what we are doing, and then talk to each other for a while, and then carry on again. Two painters would each work individually, and then at some point stop to negotiate who does what for the remainder of the job. And much of that talk is done sitting. We sit in meetings, at lunch-tables, in our home environment. When do we socially engage with one another while using our complete body in interaction with each other and the environment? As long it is not sex, there’s not much to consider.

Yes, the coctail-party. But here there is no active task, nothing ‘has to be done’ other than be there, and ‘socialise’. In that sense the coctail-party is an artificial construct, designed to be about socialising, just as is the conference, the exhibition, and so on. Interestingly the more fun situations I could think of all would involve kids, not adults. Kids build huts together in the wood, which is a very social event, and also very physical. It is an activity where the participants have to negotiate social relations as well as the mechanical properties involved (e.g the working of gravity), both at the same time, in one integrated fashion. For the adult activities that may do, we could only think of traditional socially situated crafts, like hunting together, and then skinning the bear and processing the meat.

There were some exceptions, like surgeons in the operating theatre, or dancers or actors rehearsing, or police officers investigating a crime scene. In such cases some goal-directed activity is driven both by social demands and by the more ‘physical’ properties of the task at hand. But the problem is with these kinds of activities is that one cannot sensibly act them out if one does not in fact possess the actual skills involved. If one is not a surgeon, or a dancer, or a police-man, improvising theatre would very quickly become very difficult. While everyone can enact an office meeting, once the body and the social are truly coupled in action, it seems that very specific skills and experience are needed, the kind of stuff you cannot ‘fake’ as an actor. Anybody got some alternative ideas for situations?